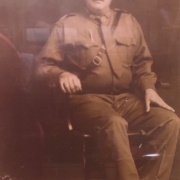 My Grandfather and his passion for healing and reforming others.

I was not fortunate to meet my grandfather Antonio Nuñez Loaiza, my mother’s Dad but I heard many great stories about him and there is one in particular that I would love to share with you. My grandfather was born in my hometown, Culiacan, Mexico on January 1, 1901. My mother recounts that he was a very affectionate father. I learned that during his childhood he had to run & hide with his father from the revolutionaries who wanted to steal the gold his family had. Thus, it is not surprising that most of his adult life, he worked in law enforcement. He started first as a police officer, later on as a sub-inspector, and finally, he became commander of the judicial police of the State of Sinaloa for almost 10 years. This position was subjected to receiving many bribes but he never took advantage of his role and lived a very simple life. He was passionate about people and love helping others. A lot of the respect he gained came from the fact that he made sure that all those arrested or detained for breaking the law were later FULLY REINCORPORATED BACK TO LIFE AND SOCIETY. During his jurisdiction, he used all his power to always support all the outcasts and he became a hero for many. He used to say that in “a life without Moral values, people will lose human dignity”.

He died in 1956 and until today he is remembered by many. I really admired what he did and loved his passion for reforming others. This is the life that is possible and we, the people, together with our elected officials, are responsible to work united to make sure that everyone is reformed spiritually and morally because sooner or later, those we have judged, rejected, and forgotten will come back to haunt us. Just like my favorite thinker, Charles Eisenstein, said: “YOUR WELLBEING IS MY WELLBEING, MORE FOR YOU, MORE FOR ME”. And this is so true to life. Below a picture in his uniform that he wore always with a lot of pride.